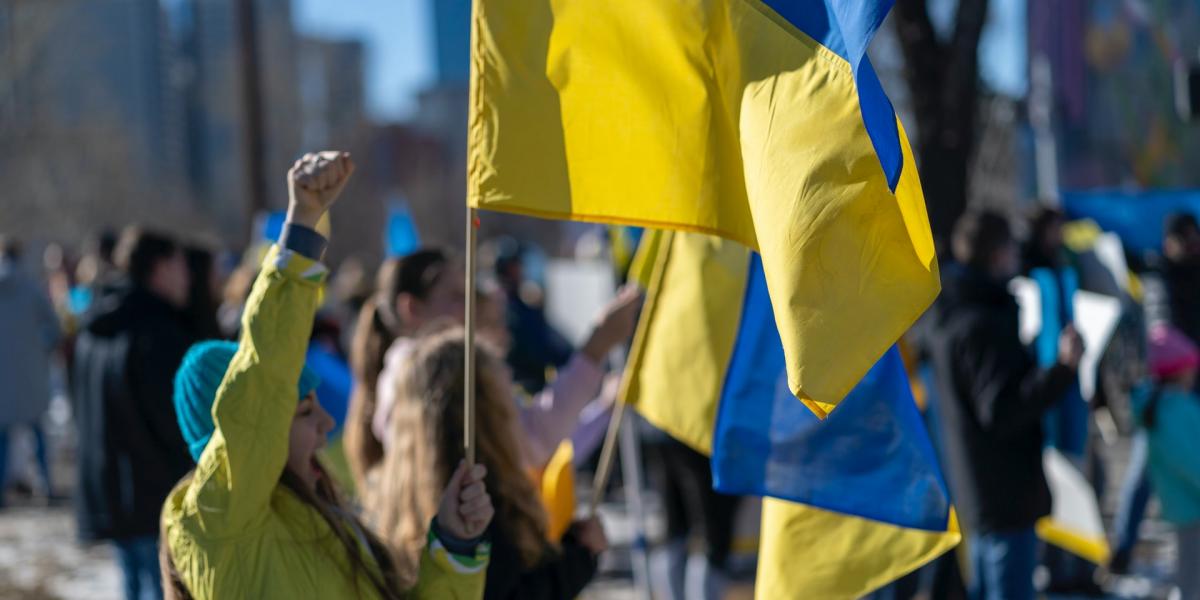 © Photo by Ahmed Zalabany on Unsplash

As the European Pool of Young Journalists, we call for EU solidarity with Ukraine

We, the European Pool of Young Journalists, unequivocally condemn the Russian invasion of Ukraine.

We have co-authored this piece as twelve young European citizens representing a variety of EU countries, but we have a united message; we want to express our deep concern for the ever-worsening situation and call for EU solidarity with Ukraine.

War. Ukraine. Putin. These are the 3 main words we have been hearing. The pictures and videos about the situation in Ukraine do leave you with tears in your eyes or in shock. But we cannot let this happen in the 21st century in the society we're living in right now. Then out of rage and frustration comes the question: but what can I do? Should I just mind my own business? No, this is also my business as our future depends on it. That’s why I believe in the major role of solidarity. If we, as Europeans, stand together we will see that anything is possible, including stopping this outrageous situation. A lot of people and organisations are already taking action to support people in need of safety, despite their different views or approaches on how to stop the war. However, this is the time when our values and motto “United in diversity” need to be stronger than ever before so we can restore peace in Europe. Agnė Jankauskaitė, Lithuania

Solidarity has many faces, and can take many forms. We can therefore show our solidarity in a way according to our means. For example, first and foremostly, solidarity to me is donating what I can financially to those in need during this time, to make a material contribution to the hundreds of thousands who are suffering at the hands of the Russian forces. Secondly, I share verified information on the situation where I see fit, and in this way I stay connected and empathetic with the cause, while also ensuring that others are well-informed. We do not live in a vacuum. We are global citizens, European citizens, and so we must act in solidarity for those facing turbulent times. In another life, it could have been us. Aleesha Wiegandt, Ireland

Coincidence and luck. That's the only difference between us and our peers who today have to fight to defend Ukraine. We, born in other countries, can go on with our lives. But as we watch the events unfolding in Ukraine, we cannot remain silent. Young people have a special power to make a difference. Today, solidarity is needed more than ever. Without it, we free Europeans cannot go on living. We are already seeing how people are able to come together, but as long as there is a war going on, we still have to do the best we can. Solidarity can bring peace, which is really needed in Ukraine right now. I believe we will see it soon. Anna Marek, Poland

I live in Lithuania. My country had been occupied by Russia for 50 years and this applies not only to Lithuania but also to almost half of Eastern Europe. I heard a lot of stories about that time from my grandmother. I know that the only thing those countries wanted was public recognition among other free land countries. Now, when the war started in Ukraine, I feel that they want to be seen and heard by the rest of the world. And we MUST hear them, MUST listen to them, we MUST shout "SLAVA UKRAINI" in all Europe, so we MUST solidarize for Ukrainian independence. Because from the history lessons we know that solidarity always wins over dictatorship. I believe that this time this phrase will also be true. And with the help of the European SOLIDARITY Ukraine will be independent for ages. Austėja Dumčiūtė, Lithuania

We have taken peace in Europe for granted, but as the Russian invasion of the sovereign state of Ukraine has shown us, it can be taken away at a moment's notice by those with unchallenged power who do not share our values. But this is a defining moment in our history. As Europeans, we promote peace, freedom, security, and justice, but are we willing to rise when needed the most? As President Zelenskiy said, are we ready to show to people of Ukraine that we stand with them? As a global citizen and a young European, I know which side of history I want to stand on. We must stand in solidarity with the people of Ukraine. United we stand but divided we will fall. Harry McCann, Ireland

Sitting in history lessons, the war seemed to me something that had passed and could not be repeated, on such a large scale, on our continent. More than once I was amazed at the courage and attitude of many people who have become part of history. Now the war is happening 100 kilometres from where I live. Now it is us who make history! We can change its fate for the better! At this difficult time, we must stand in solidarity with the victims of the war. We Europeans must unite clearly to show unity, support, care, safety, tolerance and respect for the most important gift we have, which is life. It is a fight for the future of us all, for the future of Europe. It is a fight for our independence. Finally, I would like to address the words of my Ukrainian friends who studied with me and who have returned to fight for freedom: Your courage is inconceivable, and you will be role models for future generations and a permanent part of history. Peace to Ukraine, peace to Europe. Kacper Król, Poland

I am fine. And that's exactly why I feel bad. Because while I watch the news about the war from the safety of my home, so many people in Ukraine are having to fight for their homes and their safety. People are losing their homes. They are losing their families. They are losing their hopes and their futures. And that is why we must now stand in solidarity behind Ukraine and all Ukrainians! Solidarity starts with a demonstration to show: "You are not alone". Solidarity is shown through donations, but also through the will to offer shelter to refugees. Let us open our countries, our community and our hearts. Because only together we are strong. Leonie Kirstein, Germany

"War" is a word far removed from the common vocabulary of us young people in the Western world. Conflicts are a reality so far removed from us that we have the privilege of joking about them or simulating them in video games. In reality, war remains a daily tragedy in dozens of places around the world - from Syria to Palestine via Yemen and Congo. And today, when a terrible and criminal invasion has begun in Ukraine - after eight years of low intensity conflict - we are forced to remember this. "War cannot be humanised, only abolished" says a famous proverb. This is what we must all strive to do: abolish war, forget this term, consign it to the dustbin of history. Lorenzo Tecleme, Italy

Imagine waking up one day and suddenly finding yourself in a country which is at war. Imagine your home, a place where you have always felt safe and comfortable, was no longer secure. Imagine witnessing thousands of families – including your own – being torn apart, without anyone knowing whether they will ever be reunited again. No one should ever have to face such a terrible situation. However, for the people in Ukraine, this is reality. Only a coincidence determines it isn’t ours. Today, we are the winners of the lottery of birth. This is why solidarity is our obligation and responsibility. We are all affected by this war. Even though we ourselves didn’t wake up in a country which is at war, we did indeed wake up in a completely different world. The attack on Ukraine was an attack on peace. The peace of us all. Let’s stand up together for a peaceful world. Mai Ly Le, Germany

Solidarity is an overarching value that shows the strength of community. Today, when we have to face war just 300 km from the place from which I write, solidarity is the most necessary thing we can do. In this gesture, the organisation of aid collections and direct help to refugees who are escaping from war en masse is a natural human reflex. Politicians and ordinary citizens, in solidarity with the victims of the war, show the value of human rights, the break of which we are facing today. As citizens of the European Union, we should show that human rights are the most venerable value and that no one agrees to their violation. Maria Bajorek, Poland

I can’t help but feel a little ashamed and embarrassed writing about the importance of solidarity as I sit comfortably at home, warm and secure while others are having their lives torn apart. The real difference between us and our peers fleeing Ukraine is the lottery of luck. We may live in different countries and speak different languages, but our collective solidarity with Ukraine as a global community is more important now than ever. Solidarity is a true expression of our interconnectedness as human beings. And we simply cannot remain silent. Together, we must stand up for peace. Our future depends on it. Maria Stella Conte, Ireland

If we were dying, would we not be crying out for help? If our house was on fire, would we not want the war to end? If what is happening in Ukraine now happened to us, would we not expect support? If this is how we would react, let's try to understand what our friends whose country is fighting feel. Now we are all undergoing the test of being human. Each of us should help as much as we can, regardless of where in Europe we live. Maybe we should give someone a home, or maybe just sharing photos on the web is enough. However, the most important thing will remain unity and support. This is what everyone can and should give. We are all human, we should support and respect each other, not kill. Paulina Tura, Poland