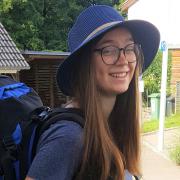 Travelling alone made me realise how many activities I would never do at home without company. I wanted to change that and I' ve never regretted it.

I'm Maike and I travelled with DiscoverEU for four weeks through Hungary, Croatia, Bosnia and Herzegovina and Slovenia - three weeks of which I was completely on my own.

Travelling alone made me realise how many activities I would never do at home without company: eating in a restaurant, going out in the evening or watching a film at the cinema. I wanted to change that and I' ve never regretted it! A phrase I heard often and internalised during my trip is "you never really travel alone". Whether on free walking tours, in hostels or on buses and trains - the longer I was on the road, the better I became at making small talk with strangers in an open and non-judgmental way.

In the hostel in Ljubljana I had two Israeli roommates. We got along so well that the next day we went on an excursion together to a national park in the south of Slovenia. The people I met during my trip made my time much more memorable than all the beautiful landscapes and cities I saw. I am convinced that I would not have made so many of these acquaintances if I had travelled with German friends in a group!

Mostar, a small Bosnian town, will remain in my memory as one of my favourite travel destinations. With my side trip to Bosnia and Herzegovina, I left the EU - but will still call it an important part of my DiscoverEU trip. In Mostar, I was able to interact with locals like nowhere else, learn so much about the history of the entire Balkan region and experience the differences to the EU countries first hand.

During my four weeks of Interrail, I probably had almost as many new beginnings as sunrises - I visited many places, met all kinds of people and reinvented myself over and over again. That's why I can highly recommend not only Interrail and DiscoverEU, but especially travelling alone!